Lights: Keeping Up with the Times 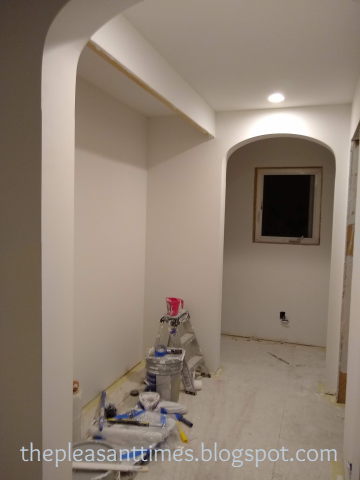 I didn't mention this in my last house post about the lights, but there was a bit of debate between myself and the electrician about the upstairs light fixtures. You see, the standard had changed.
We had decided on recessed lights for most areas. We were all for using LED bulbs because of their long life and the ability to get the tint we wanted. But our electrician told us that basically canned lights with bulbs were out and the new flat LED fixtures were in. No need to drag large metal boxes to the attic to install. No need to have the hassle of screwing in bulbs.  No need to buy the "rings" to put over the bulb for a nice finish. The new kind were so easy to pop in the holes in the ceiling, were all-in-one, decorative, light weight and super compact. They were also cheaper. Sounds great!
What concerned me was that in however many years the light does die out, the entire unit has to be thrown away. There is no way to replace the little "bulb" (which is just a very small bit of tape with a quarter inch LED on it). That seems so wasteful. The electrician assured me that these lights last so long that it would be years and years before any had to be replaced (these things could last ten or twenty years depending on usage). That brought up another question: will the replacements be more expensive in ten years? Will the standard sizes have changed meaning we have to renovate to replace? Not only that, but a lot of the larger, decorative fixtures are this same sealed, no-bulb-to-replace style now. The thought seems to be that styles change and you will want to replace your fixture with a new look by that time anyway, so toss out the entire thing. This whole new way of doing things didn't seem the wisest way to me!
I'm sure the electrician thought I was really weird to hesitate when it was clearly, from his point of view, the greatest thing since sliced bread. The debate went on, but sometimes there is no swimming against the tide of change. We ended up putting in some of the big-metal-box-in-the-attic recessed lights, but also lot of these little LED discs. It became unavoidable when they were so much less expensive, time-saving and frankly so widely available. They really are better for install, smaller, unobtrusive and look great. I am happy with them. I would probably buy them again (I could use a couple more here or there...). Actually they might become the only choice in the stores after a while. I just wonder what will happen in a decade or so when the lights go out. Maybe by then someone will have figured out how to crack them open and change the wee light strip inside.
posted by Lillibeth

Just got canned lighting installed in my "new" old house in the laundry room. I love being able to see things.
Never thought to ask about all this!
Love the look in your photo!