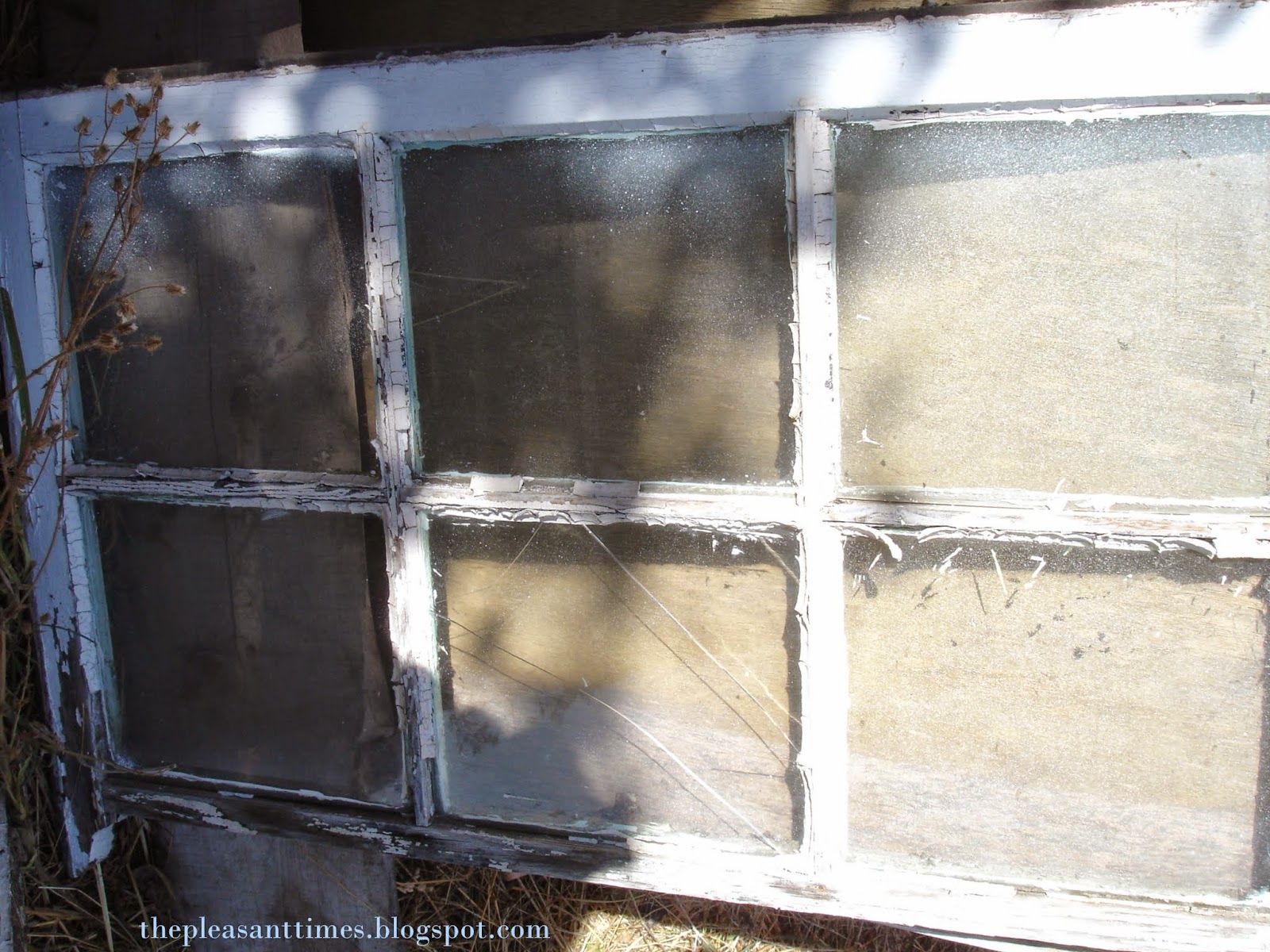 I've seen a lot of re-purposed windows in decorating magazines and online. I now have had the privilege of salvaging a couple old windows myself. 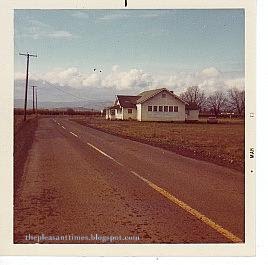 This old building used to be a country schoolhouse, and then it was bought to be a church building. I don't know how old it is exactly, but I met someone who went to school here in the 1920's. I guess that means that I can safely say that the building is coming close to one hundred years old, but it could be older. The multi-paned windows were all around this building originally. The above photo is from 1972. 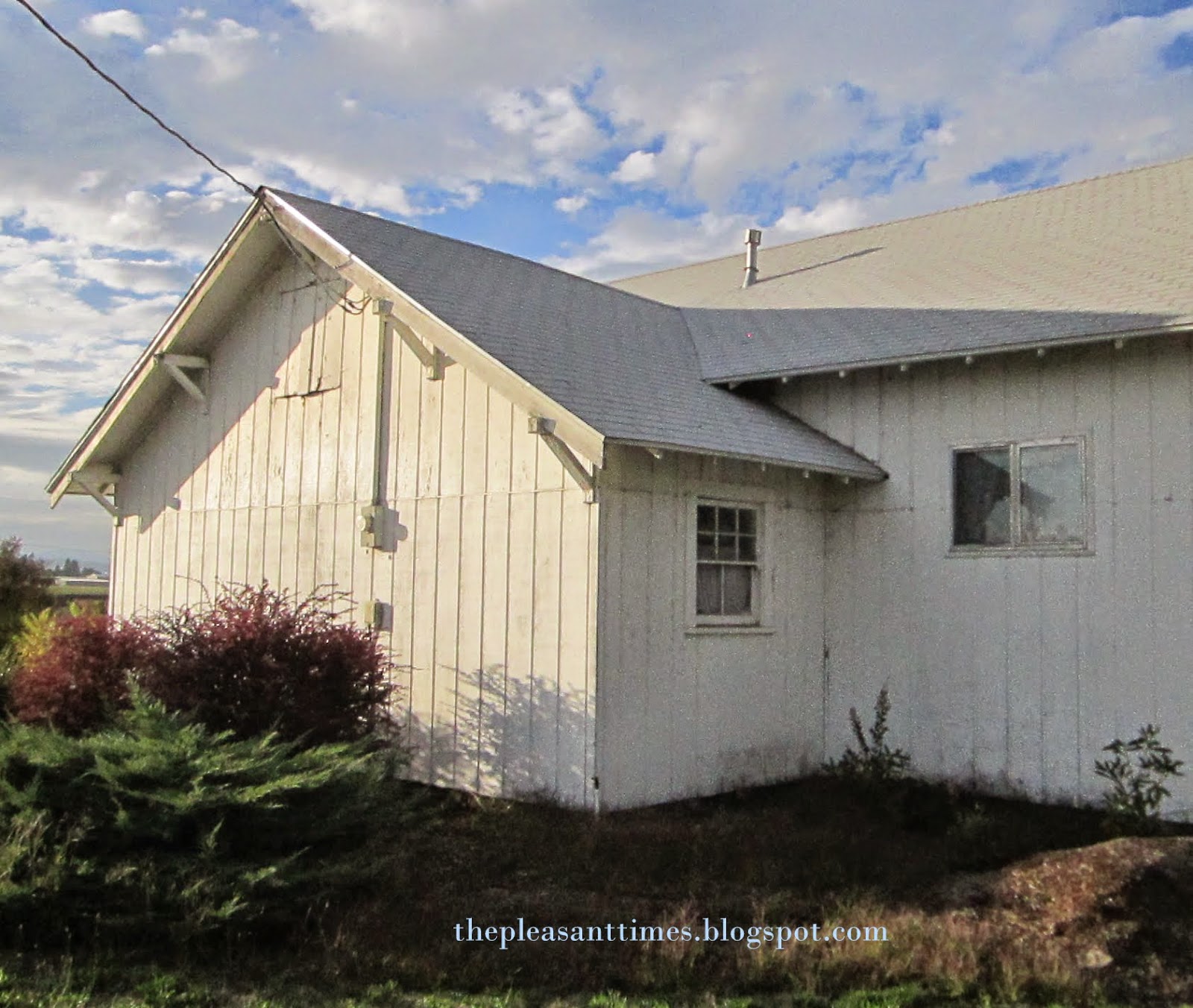 Over the years, update after update, replacement after replacement, and the need to renovate for different purposes, have altered this old building. The change from a schoolhouse with desks to a church building with pews, and the addition of more rooms took out many of the old windows. The entrance was moved from the gabled end shown above, to another part of the building. That was my grandfather's idea, who preached here for many years. There were two old windows left, on either side of this gable, and those were the ones I salvaged. 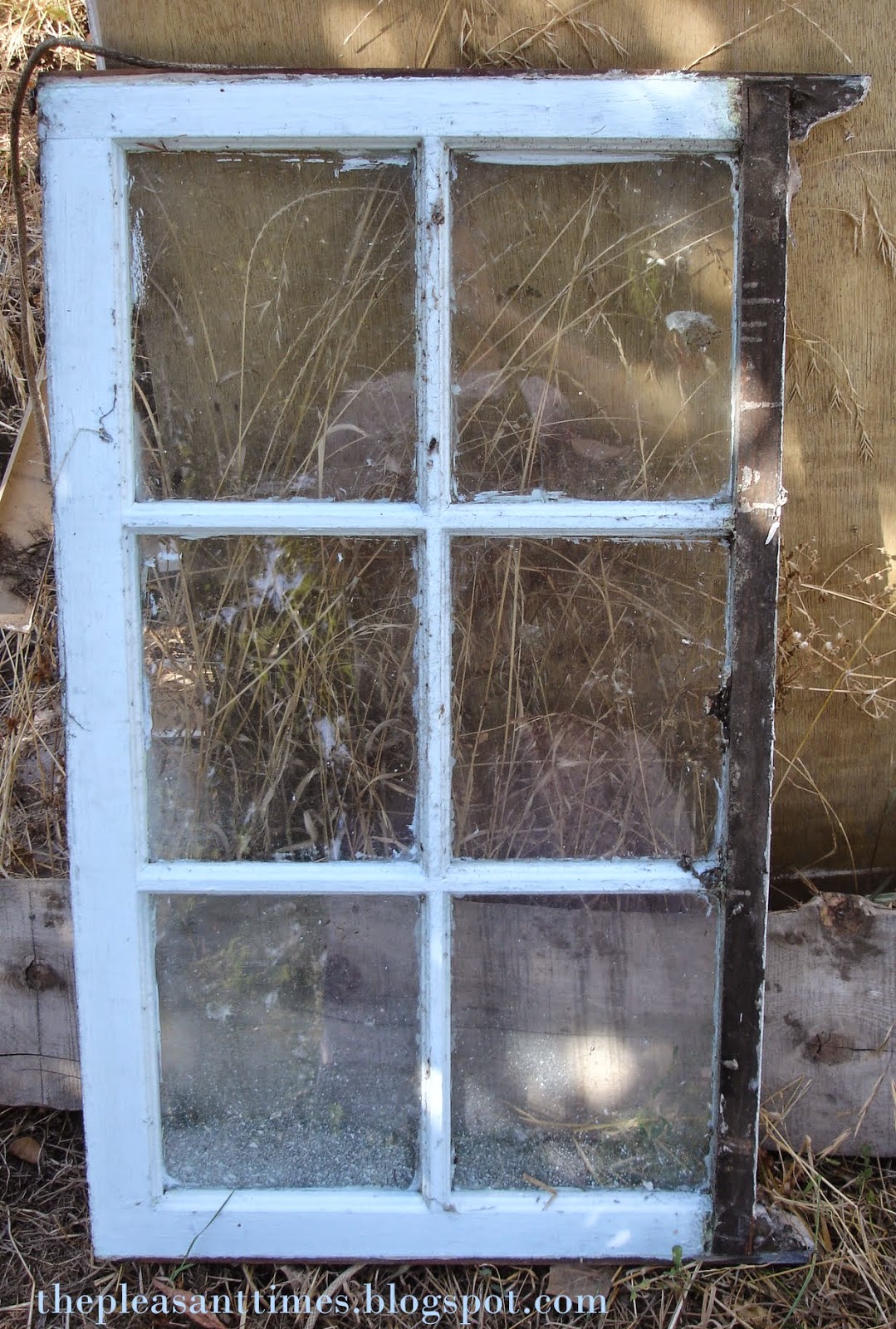 It was time for the windows to be replaced with modern ones that wouldn't let all the cold air in. I was happy to have the old ones! Since one pane in each window was cracked, and I didn't have any replacements, and since the glass made the window so heavy, I thought it best to take all the panes out. I also only saved the top half of the window, as the bottom halves were much rotted from the weather. Several days of scraping away many types of plaster that held the panes in, and pane-stakingly (sorry, I couldn't resist!) taking out the little metal tabs that also held the panes in, left me with the wooden window frame.

A bit of advice to anyone who may want to try this-- set a big cardboard box under your saw horses as you work. It will catch all the bits of glass and plaster and make clean up easier. Next, the glass will break, even if you are careful, and actually on most of my project it was much easier to get out that way, and let me have a go at the stuff that was plastering it in with more vigor. Wear work gloves. Lastly, slow and steady is better than having an accident with sharp tools and shards of glass! 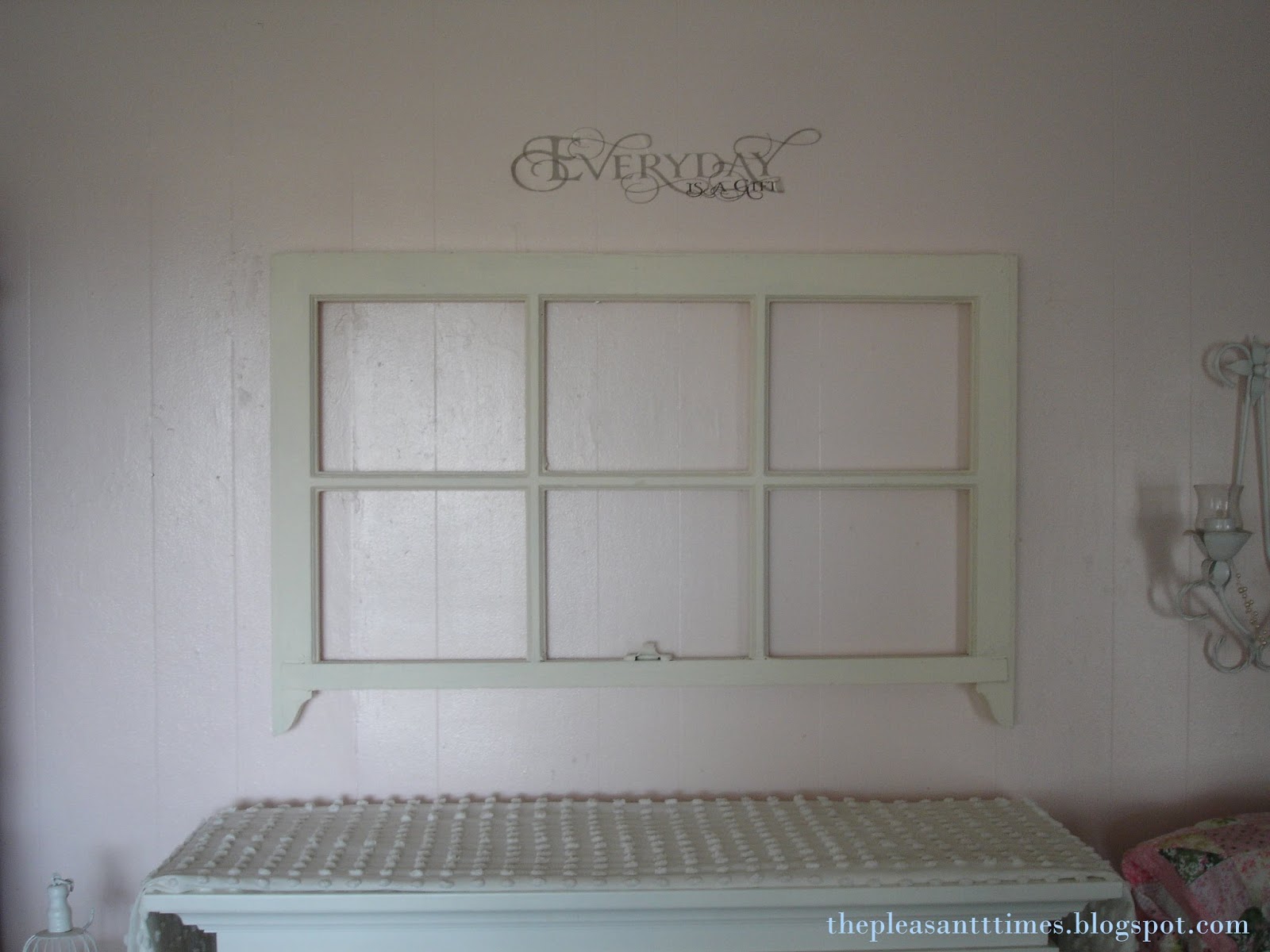 A nice coat of paint (Benjamin Moore "Capri Coast") and my week's project is done! I gave one window to my mother, and the other I'll keep. Shown above is the window displayed on my mother's wall, above the mantel. I'm sure she'll have it decorated in many interesting ways as the seasons change. I haven't decided what to do with mine yet, so it is leaning against the wall. I'm glad that I have a story to tell about the building that these windows came from, and the relation to my family, so that instead of just being another decoration, they may become a family treasure. 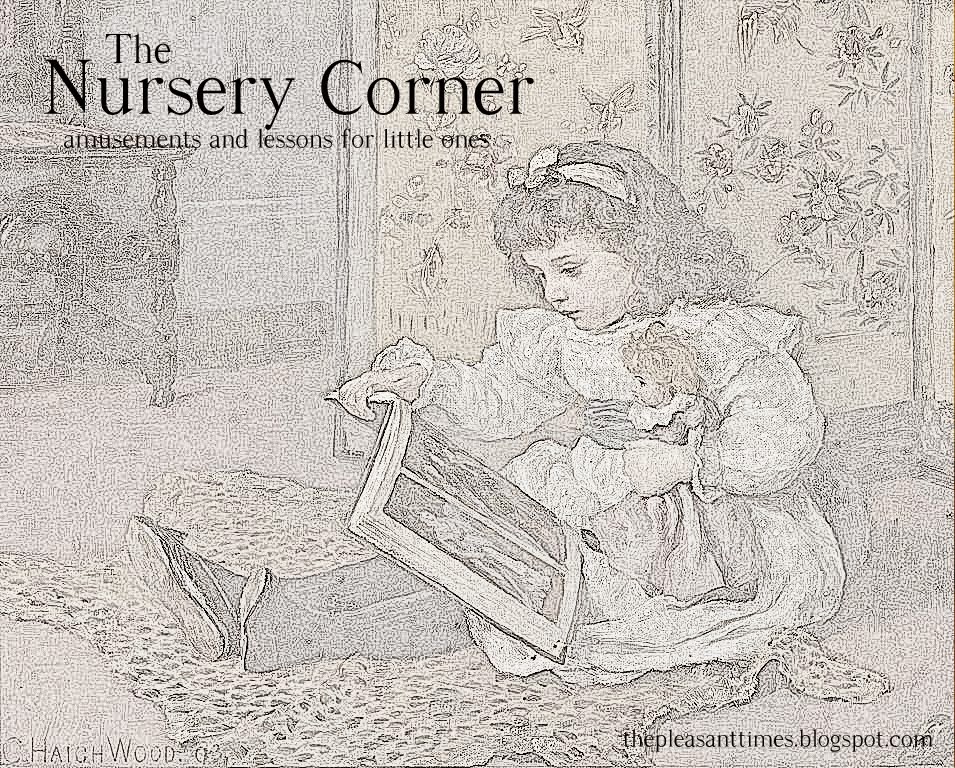 Buy This at Allposters.com

Sometimes you may be so busy playing that you may not notice all the objects you have left on the floor. Maybe you left the toys you were playing with earlier there, while you went to read a book. Or you may have left your book on the floor, while you went to play with toys! If you step all over your books and toys, instead of picking them up and putting them away, you ruin them. Even if it looks like no harm was done, eventually that ill-used toy or book will wear away or tear. Even if you do not damage the toys, an older, bigger person might not see them, and tread on them and break them. Then you will have to throw your toy or book away. 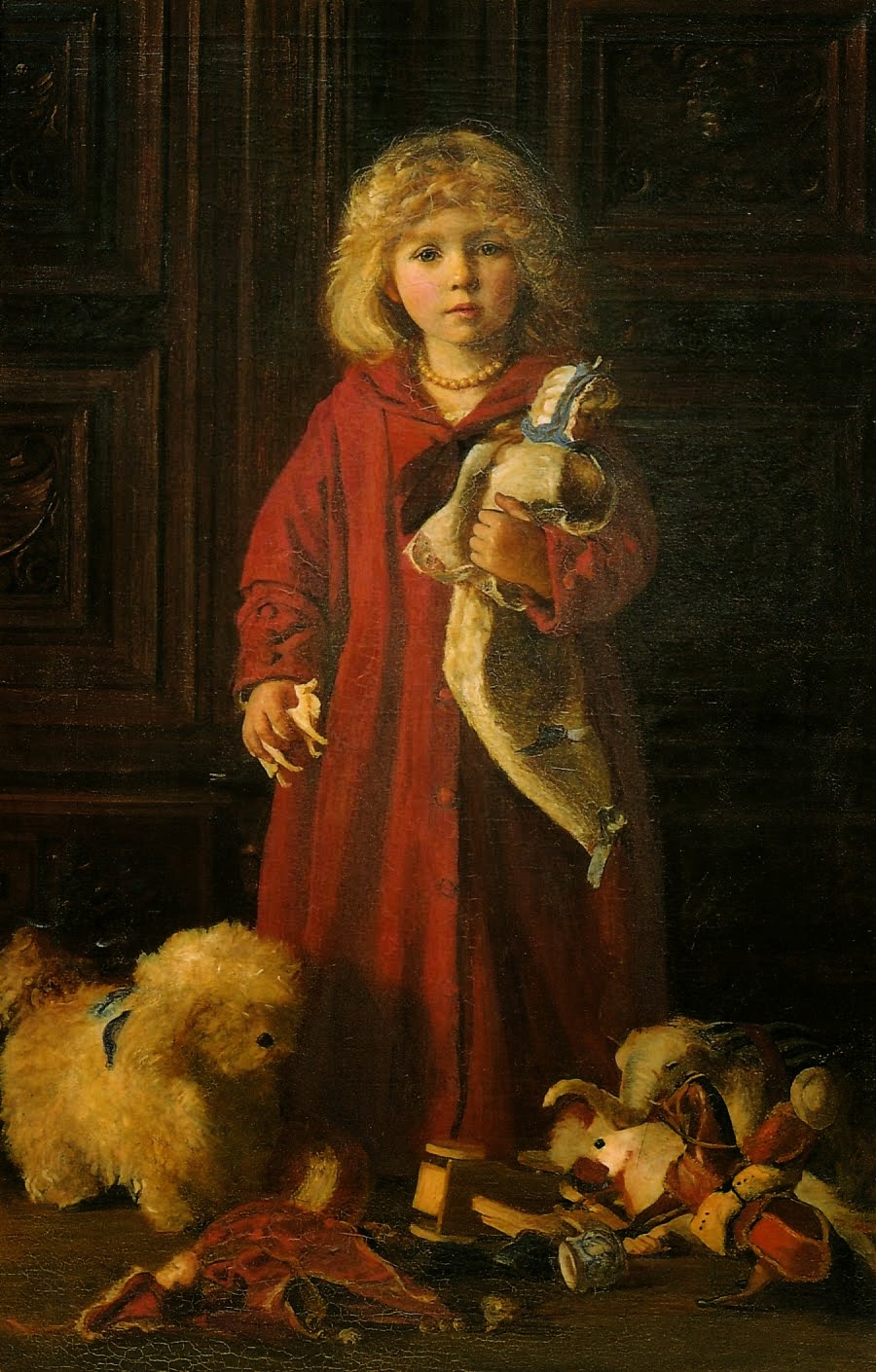 You may think, "I'll just buy another one," but you want to be a good care-taker of what God has given you already. Some of your things might not be replaceable. What if you became very, very poor? You would be sorry that you treated all your things badly, and wish you had them still. If you take good care of your toys and books, they will last a long time, and you will be glad someday that you were careful. 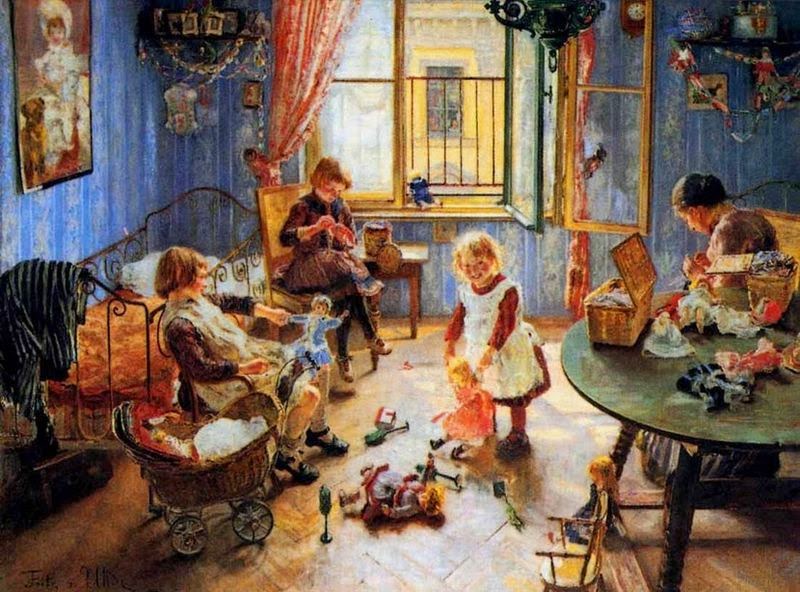 Toys and books on the floor, or toys left scattered in the yard, can cause a person to trip and fall. Older people who cannot see well, or even little toddlers who are just learning to walk, can hurt themselves very badly on your things if you leave them laying around. You may even surprise yourself and trip over your own toys!

Sometimes stepping on things without thinking, or checking first, can lead to cuts on the feet. Even with shoes on, you can still get hurt by not watching what you step on. Sometimes children will think that they are free to walk all over loose wood that is laying about the barn or wood shop-- but watch out because those boards can sometimes have nails in them that are dangerous to step on. Here is something to remember in places like that: Don't step on something that you can step around or step over.

Children's...
Frederick ...
Buy This at Allposters.com

And of course, in the house try to pick things up instead of stepping on them, so they will not be stepped on by someone else! 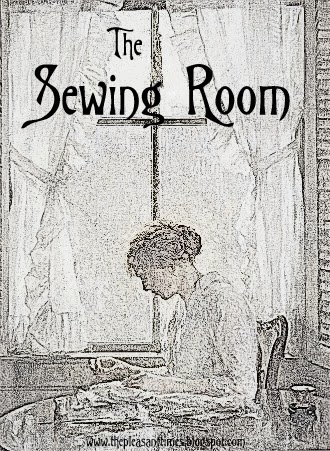 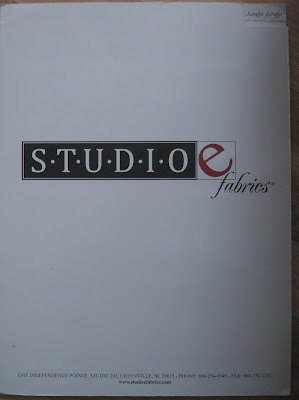 I was pleased to acquire some fabric sample folders over the last few years, and have made many little projects with them. 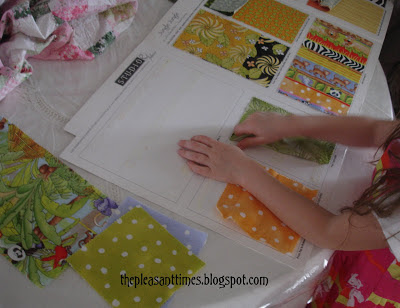 The swatches are already in pinked perfect squares or rectangles, so the only thing to do is remove them and sew-- on this project, there was no pattern cutting required! However, it is a puzzle to piece since the swatches are not all the same size. I used this as a beginner project to teach some patchwork and quilting. 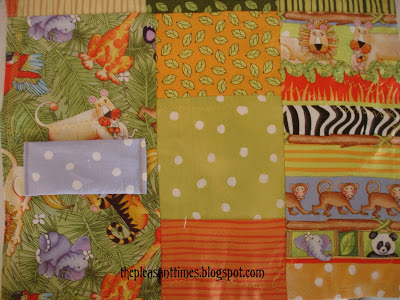 These fabrics are rather wild-- but make a bright placemat for a child's breakfast bowl to rest upon! The stash was raided to find a perfect print to make a coordinating cloth napkin from. 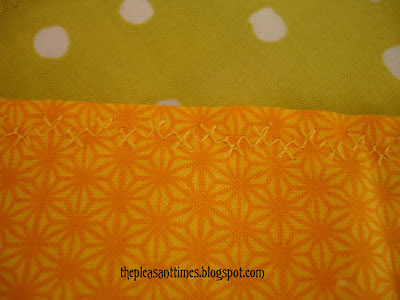 filed under The Sewing Room


Buy This at Allposters.com
posted by Lillibeth

filed under advertisments and links, The Arts

Here are a couple of printable baptismal certificates. Sometimes these are hard to find at the local Christian bookstore. Having a "certificate" is really just a keepsake for the person to remember their baptism, and these should be printed halt-sheet-of-paper size to fit into the front of a Bible.

One of the things that is recommended when I attend church, is to write a letter to yourself after your baptism, stating the reasons that you were baptized. Years later, this may be an important letter to you. Perhaps, you could print the certificate on one side of a sheet of paper, and leave the other side for writing the letter, and fold it in half so that behind your certificate in your Bible, is the letter your wrote to yourself about your baptism. 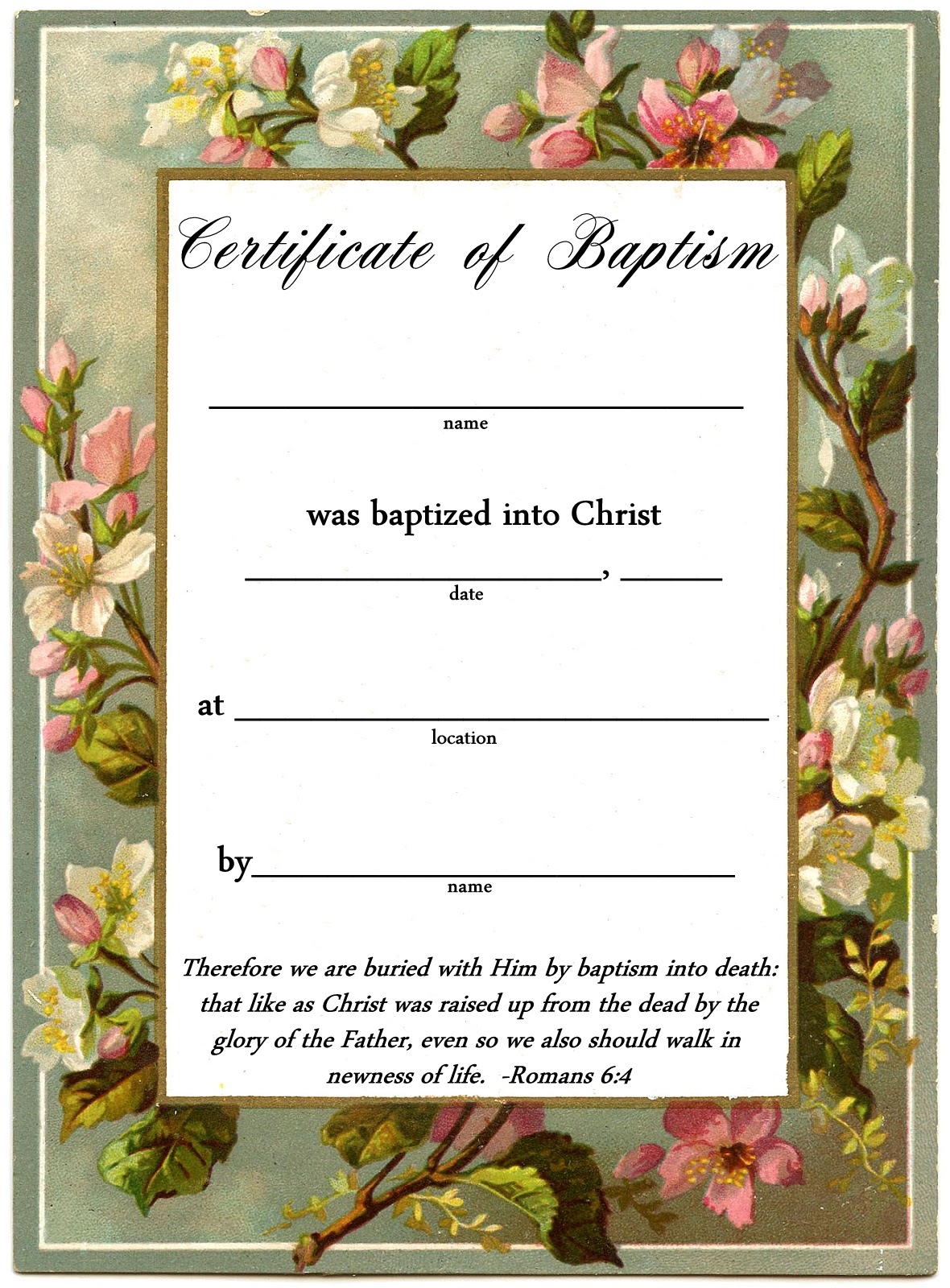 And now why tarriest thou? arise, and be baptized, and wash away thy sins, calling on the name of the Lord. -Acts 22:16 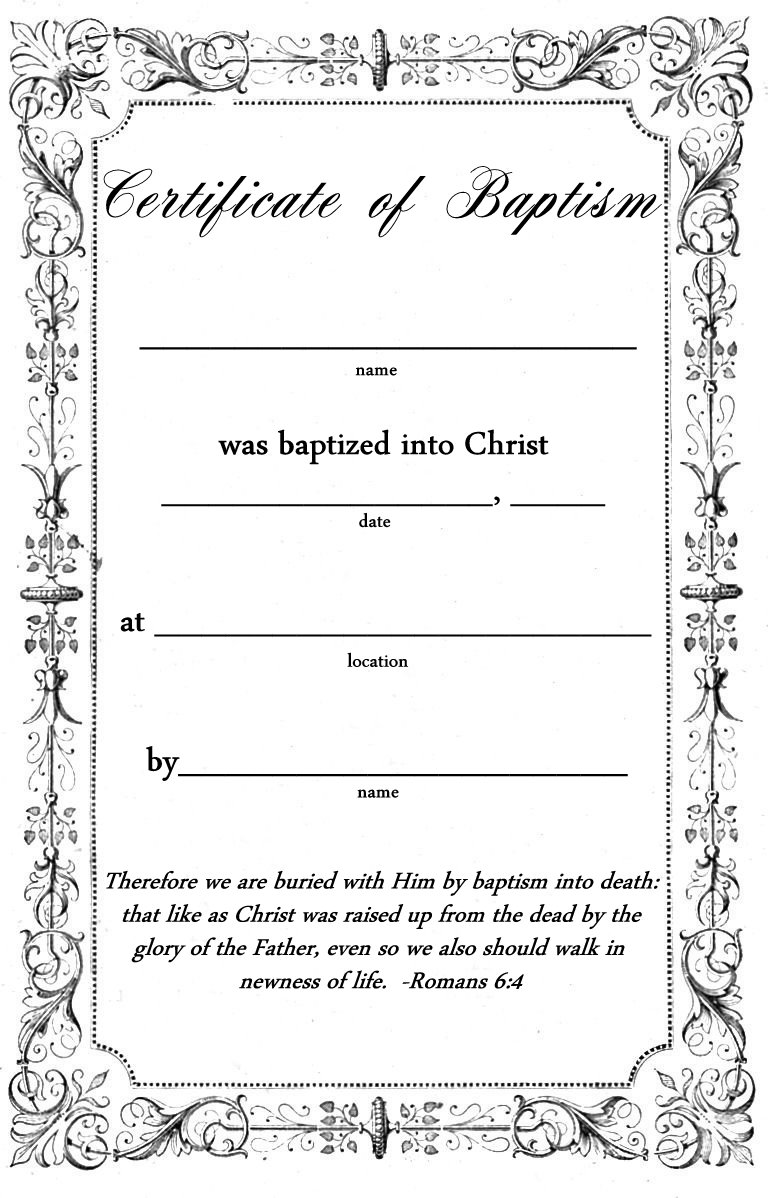 Go ye therefore, and teach all nations, baptizing them in the name of the Father, and of the Son, and of the Holy Ghost: teaching them to observe all things whatsoever I have commanded you: and lo, I am with you always, even unto the end of the world. Amen.  -Matthew 28:19-20

Here is an example of one that is filled out: 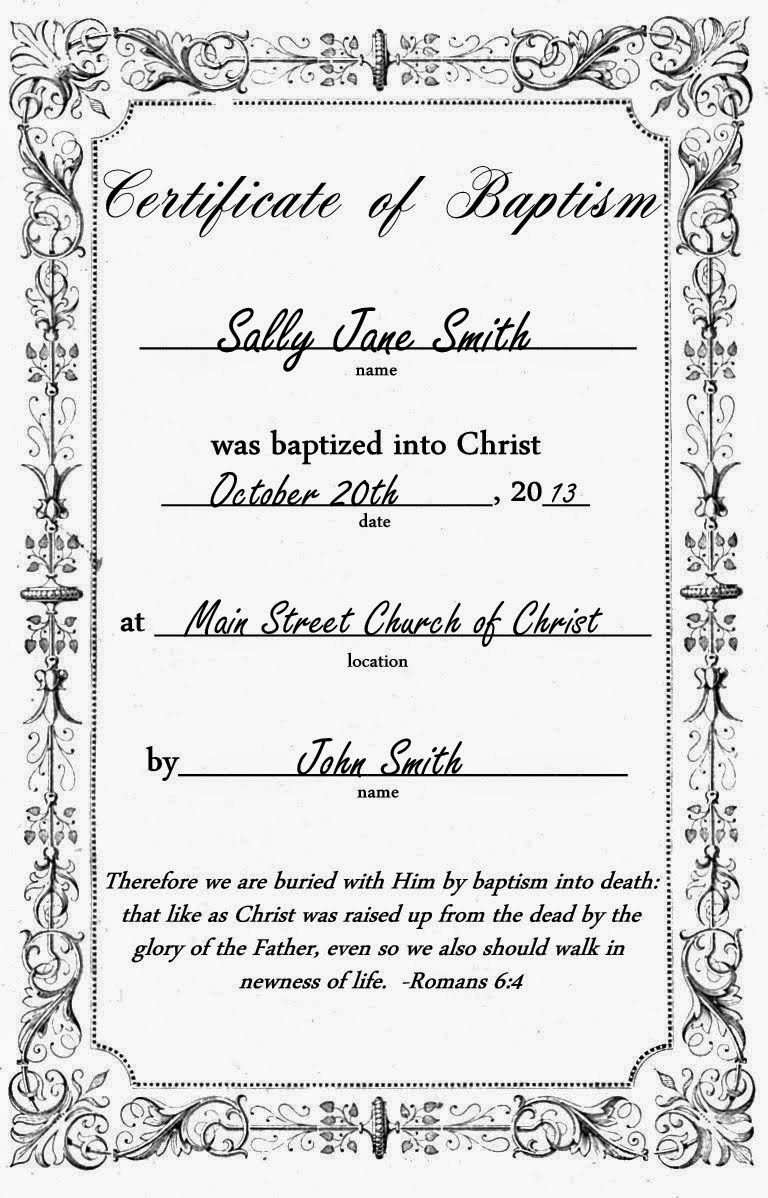 (The example "Main Street Church of Christ" could of course be a river or lake, "Missouri River" or "Lake Tahoe" or wherever)

As usual, the wonderful frames come from thegraphicsfairy.com-- there are so many pretty borders and frames to choose from over there so be sure to visit!

Osprey in Flight...
Russell Burden
Buy This at Allposters.com


A lesson from McGuffey's Readers