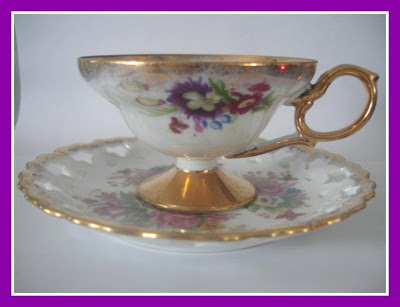 Today I am featuring another thrift store find: a delicate, shallow teacup with an orphaned saucer that doesn't quite match in design but sure does match in elegance. 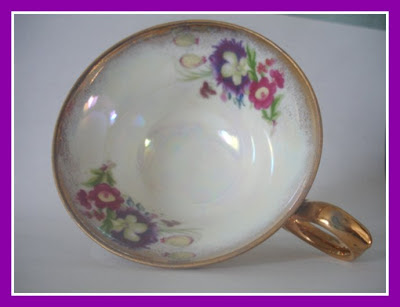 Here is the inside of the cup. I'm not sure what the flowers are- especially the fuzzy purple one. 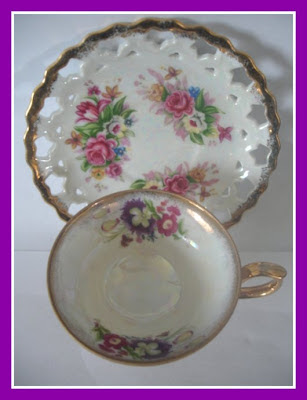 The saucer is decorated with traditional roses and lilies. The cut-out edge makes a lacy border. 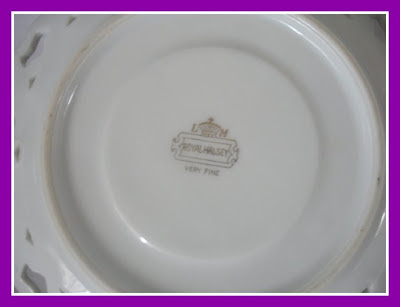 The cup is unmarked, but the saucer is labeled "L.  M.,  Royal Halsey, Very Fine." 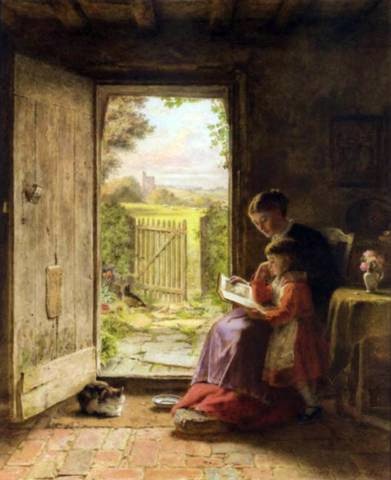 I always feel a little bit sorry for my beginning reading and writing students. Getting  the alphabet memorized is one hurdle, but learning phonics is another, as the exceptions to the rules are numerous and often don't seem to make any sense! Even though we do phonics, so much of it ends up having to be memorized as we shrug and say "that's just the way it is."

We've picked up some tips here and there in books and games to help us remember the phonics, such as "igh" being the "3 letter I" or that a silent "e" makes the other vowel long (such as in "pie"). Some things that have been a great help, though, have come from the imaginations of my students!

One of my reading students came up with a little story to help him learn phonics sounds (we were doing the Writing Road to Reading at the time). His "aha" moment with diphthongs came and he said, "when these two letters travel together, they make [this or that] sound." I have been using this phrase ever since on all my other beginning readers!

Those traveling letter pairs or groups sure are interesting. Some letters dominate over the others, and won't let the other one speak up. Some letters are sneaky. Some decide to change their names entirely, preferring anonymity. Some try to slide past without being noticed at all.

Here are some examples:

When O and W travel together, they sometimes say "ow" as in "cow." But sometimes, they say a long O as in "low."

When E and A travel together, E is the one that does the talking, as in "beast" or "each."

When A and I travel together, A does the talking, as in "pair" or "fair"

When A and U travel together, they act like a short O-- as in "caution."

Q is really shy. Q prefers to be in company with U before he'll talk. He sounds like a hard C but wants to say W too, so in words like "quilt" and "quail" you can hear him speak up.

When E and I travel together, they are pretending to be A so they can get past security. So in the words "Eight" and "weigh" they think they are disguised.

When S and H travel together, they don't want anyone to know. So they say "shhh!" TI, SI, and CI also want everyone to hush up in some words, so they say "shhhh!" in "nation" or "mission" or "precious." Frequently, S and I will say they are Z as in "excursion." We are pretty sure that these letters are spies.

Some letters are silly and think that they can get past by pretending they are someone else, such as P and H in "Philip" pretending to be an F.

T and H make a very silly sound, sticking their tongues out at you when they go by.

Some letters are hiding behind others, such as K, which hides behind N in words like "Know" and "knot." G and H are like that-- sometimes in words like "Ghost" the G is dominate, but a lot of times they are hiding in the groups of letters, like "night."

By far the boldest travelers together are O, U, G, and H. These letters are all over the map in pronunciation, and they like it that way. Sometimes they sound like an "f" as in "rough" and sometimes they can all get away with having the vowels speak up for them, such as O's short sound as in "thought" or U's long sound in "slough." There are over a dozen ways in which this group will try to sneak past you.

Not only do these little stories help the child with learning diphthongs, but it makes it a lot more fun for the teacher, who may be going through the phonics flashcards for the 300th time! 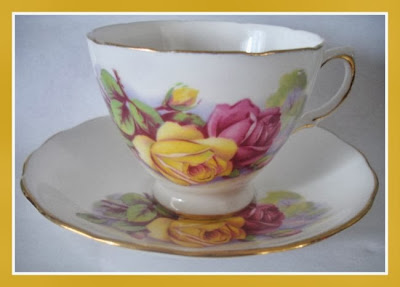 Here is a pretty tea cup that I think looks well on an autumn tea table! 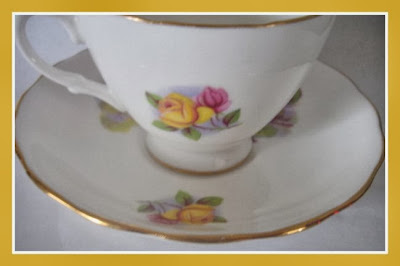 There are tiny roses on the back. 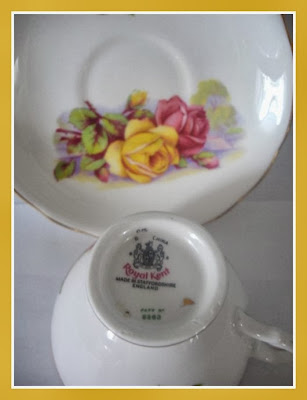 Royal Kent, Made in Staffordshire England

How To Boil Water

Why is it important to know how to boil water? Won't any hot water do for cooking? Can't I just use hot water from the tap?
No.
Recipes call for things to be hot, to be simmering, to be boiling or to be brought to "a rolling boil." Failure to follow these specific instructions can make things taste awful! Foods like rice or pasta will not cook correctly!
The tea will not steep!

The Young James...
Marcus Stone
Buy This at Allposters.com

Black teas and herbal tea will not steep right unless the water is at the right temperature. It will taste like blah hot water with some sort of flavoring in it (I realize there are specific temperatures for specific teas, and I won't go into that in this post). The hot water coming out of the regular kitchen tap is nowhere near boiling temperature. What that hot tap water is good for, is filling into the teapot to warm it up while you are waiting for the water in the tea kettle to boil. Once the tea kettle water is boiling, you can dump out the tap water from the teapot and then make the tea with boiling water, without the fear of your teapot cracking.
Why is it important to go on and on about this? As someone who likes milk in my tea, which cools it down, I like to start with a really hot cup of tea. Otherwise when I pour the milk in, I get a lukewarm serving. The way I see it is, if you can place your hand on the teapot and hold it there for even a second, it isn't hot enough.

So on to how to boil water!

First, use cold tap water. Cold. Not lukewarm, not warmish and NOT hot! 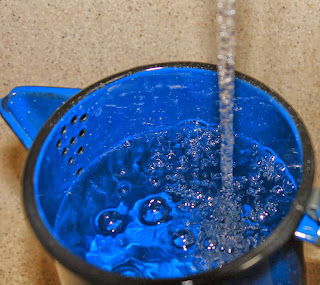 Run the water for a while before filling your kettle-- it will also get the "sitting in the pipe" flavor out of the water-- and will be nice and cold.
Now, set the pot or kettle of cold water on the stove and turn the burner on to "high." A lid on the pot will help it to heat up faster. 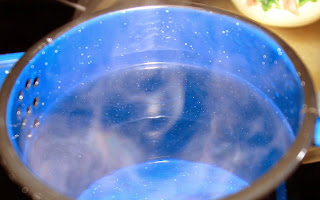 See the steam coming up from the water? It isn't boiling. It's hot but it isn't boiling, so do not pour this into the teapot yet! Or put in the pasta yet! 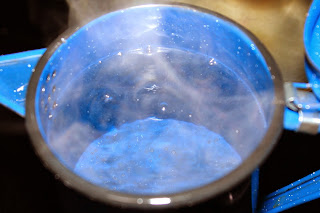 Aha-- see the bubble in the middle of all that steam? It isn't boiling. Don't use it yet. 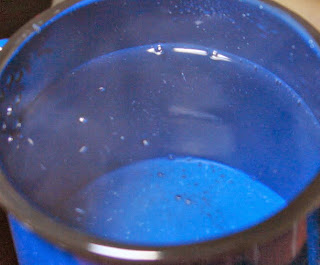 Now there are lots of little bubbles-- and it even sounds noisy. Don't turn off the burner! It isn't boiling yet! You can tell the water is boiling when it quits making noise and starts to be quiet. If you do not have a tea kettle with a whistle, please resist the urge to turn off the burner because there is noise in the kettle. It isn't ready yet!
Rapid little bubbles means it is simmering. 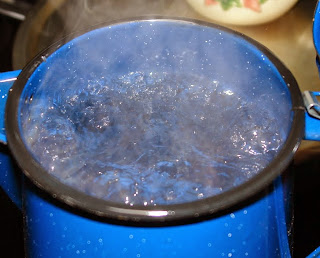 Now you can see that the water is boiling. That is, large bubbles racing up to the top of the water. 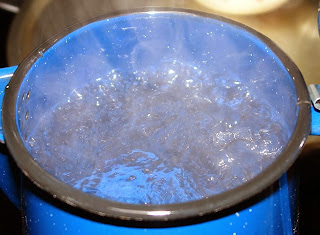 And here we are getting to the rolling boil. A rolling boil may be called for in some recipes. If you start out with a good rolling boil for some cooking, the water will return to a boil very quickly after you put the food in (Sometimes recipes say to bring water  TO a boil. In that case you don't want the water to go on and on and on before using it). 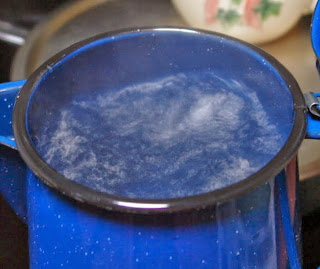 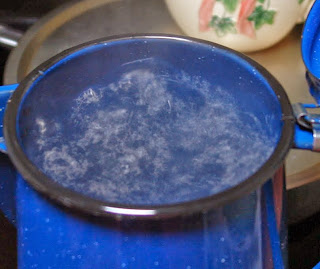 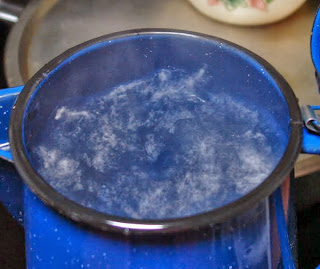 When you lift up the kettle to pour it into the teapot, and you can feel that the water is still moving inside, then that is a good strong boil. And now you are allowed to use it to make  that lovely, hot pot of tea!
posted by Lillibeth 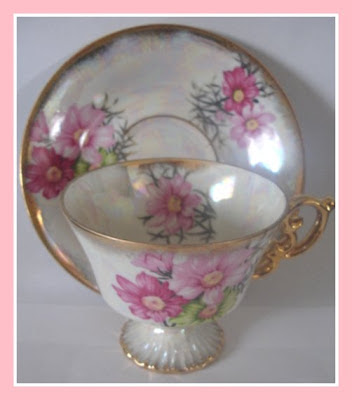 This delicate, pearly pedestaled tea cup was found at an antique shop. 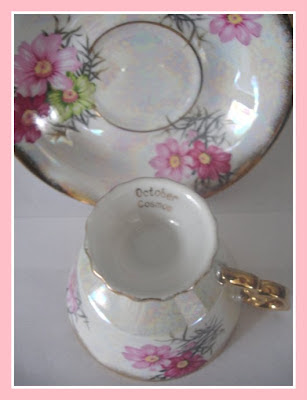 It says "October, Cosmos" on the bottom of the cup. I have another month as well-- I wonder what the whole series looked like? 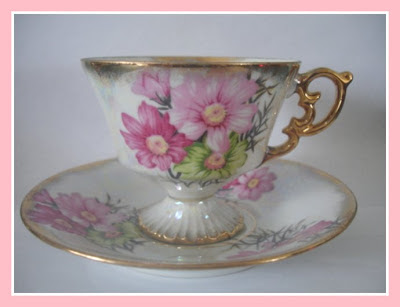 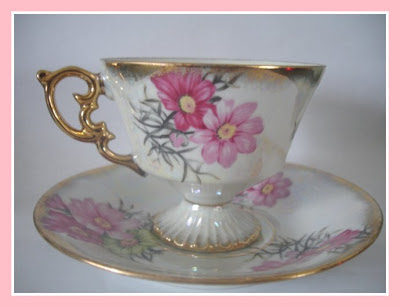