Good Reasons to Take That Survey 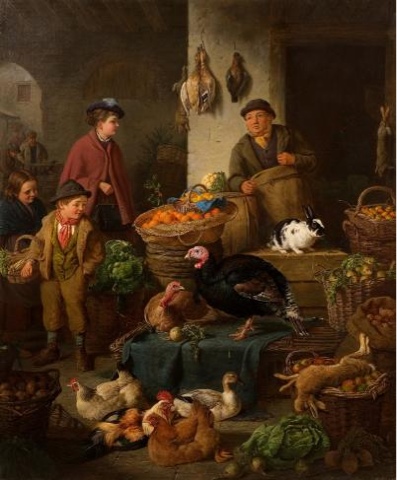 Painting: The Market Stall by Henry Charles Bryant
http://commons.wikimedia.org/wiki/File:Bryant,_Henry_Charles_-_The_Market_Stall_-_20th_century.jpg
Have you ever had the clerk at the grocery store hand you your receipt and tell you if you took the survey listed there, you could win a gift card? I rarely win anything, and rarely have the time to fill out surveys online. The other day, though, I did a quick, usual kind of grocery shopping trip, and on a whim I filled out the survey when I got home. I realized something as I was filling it out- it was a handy place to complain! Not that I had had a bad experience, but there are things I just put up with, that I don't have the heart to complain about to the clerk.
So, I used every "suggestions for improvement" section I could to tell the grocery giant that I wanted them to label their GMO foods, give us bakery bread without soy in it, that their organic produce is priced too high.
Then I complained about the magazines. Assaulting the customers at every checkout, those awful magazines should be complained about by every decent customer that comes through. Not many of us take the time to hunt up the manager to say something about them, and often the magazine displays are the decisions of the corporate folks anyway. I will still be putting quilting magazines over the bad ones to clean up the checkout lane, but now I can send a message about those awful magazines to the folks who claim they will be listening. I also gave them an idea of what I would like to see (and buy) instead- gardening, crafting, decorating, and cooking magazines could replace the trash that is there now.
I wonder what would happen to the magazine displays if a lot of people took the time to complain about them this week?
Maybe some of us would win a gift card!
posted by Lillibeth No comments: