No Bake Carob Candies for the Children's Tea Table

Tea-Time
Art Print
Elsley, Arthur...
Buy at AllPosters.com
Here is a quick and easy-to-make candy that is a fun treat for everyday afternoon tea. I made this as an experiment, based on the no-bake cereal bar idea, and of course had to do a second batch to get correct measurements:)

Carob is often thought of as a substitute for chocolate (to avoid the small amount of caffeine in chocolate, for instance). But unfortunately, nothing can match chocolate! Carob has its own virtues, however, one being that it is naturally sweet, so no extra sugar is necessary in this recipe.

In a small saucepan, over medium heat, mix until melted:
1/2 cup peanut butter (I used the organic kind that has palm oil in it; if you are using the natural peanut butter, you may have to add a small amount of oil or butter to make this smooth)
3/4 cup carob chips (available at the bulk section of some stores)
6 large marshmallows, cut in half.

Stir until the marshmallows start to melt. You want them to melt enough to glue it all together, but still leave some marshmallow to bite into. Remove from heat and add:
2-2 1/2 cups of cereal, I used little plain oat "O's" but this will work with other kinds, or even plain oatmeal (you may need more or less than 2 cups). Mix until cereal is coated and sticks together.

Spoon onto waxed paper, or into a cookie cutter shape on waxed paper (today I made them into little hearts). You can spread this in a pan and cut it into squares later. Refrigerate until cool and firm.

You can also use Chocolate in this recipe, but you will have to add extra sugar to taste depending on the kind of chocolate you use.

This is a quick candy to make in the morning, and then by tea time the children can have one with their peppermint tea! 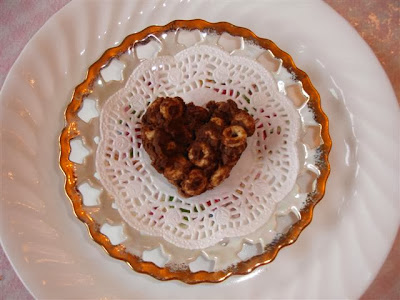 As it is Memorial Day, I thought I would share some of the verses from Carrie Peterson's Autograph Album. A lot of the verses in the album, and indeed in other autograph albums of the time, had to do with "Remember" ("Forget-Me-Not" was a popular phrase to write, no doubt it came in handy when one was presented with such an album to write in, and one's mind draws a blank!). 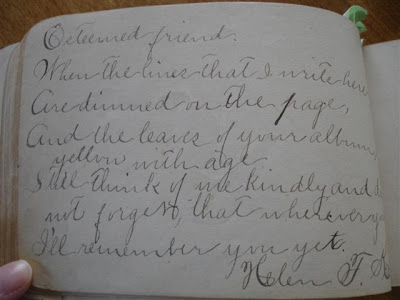 Esteemed Friend:
When the lines that I write here
Are dimmed on the page,
And the leaves of your album
are yellow with age:
Still think of me kindly, and do not forget, that wherever you are
I'll remember you yet.
Helen F Krell. 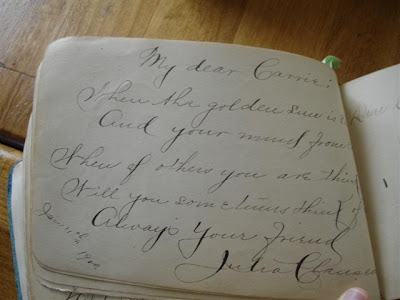 My Dear Carrie,
When the golden sun is setting
And your mind from care is free
When of others you are thinking
Will you sometimes think of me
Always your friend
Julia Clausen
Jan. 11th 1900 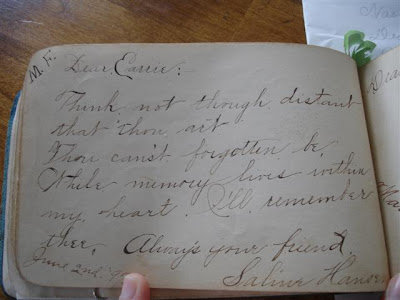 Dear Carrie,
Think not though distant that thou art
Thou cans't forgotten be,
While memory lives within my heart
I'll remember thee.
Always your friend,
Salina Hansen
June 2nd [18]'97 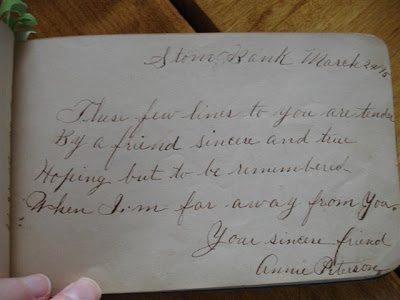 Stone Bank March 24/95
These few lines to you are tender
By a friend sincere and true
Hoping but to be remembered
When I'm far away from you.
Your sincere friend,
Annie Peterson

Friend Carrie-:
Remember me now,-
Remember me forever,
And remember the times
we spent together
Your friend,
Emma Petersen

posted by Editor No comments:

I am sure that many of your availed yourselves of the opportunity to watch the Cranford series on Public Television this month. As I am a fan of most costume dramas, I was prepared to enjoy this one immensely.

Cranford is about a little village in England, and the inhabitants thereof, their wants and wishes, secret hopes and desires, amidst the daily activities and events of the village. Lest you think this sounds boring, let me assure you it is quite the opposite. If I had been of a frail constitution I would not have survived this series. When I say "hopes and desires" I mean largely profound things, and when I saw "events of the village" I am speaking of absolute tragedies and shocking events and moments of triumph.

As I understand it, this production is a compilation of several books, none of which have crossed my path in my short life. However, as a book lover and one who dislikes seeing stories "refreshed" or "adapted" by filmmakers, I hope for fellow loyal book devotees that this film was accurate to their imagination, at least as accurate as a compilation could be.

I also understand that my former criticisms of these Masterpiece adaptations being too "choppy" had to do with editing it for the time slot on television. If "Cranford" had been edited, it did not appear to be choppy to me, just fast-paced. It was not too difficult to keep track of everyone, a little easier than a Dickens film I think.

The acting was fine; I think that this was a gathering of some of the best actors, many familiar to us from other period films we enjoy.

Though I did not entirely care for the older ladies' excesses of lace on caps and collars, I can say that I admired many of the finer points of the costumes, and I very much liked the dresses of the younger characters. They were modest, which is quite a rarity in movies.

However, the medical/bloody scenes were too difficult to watch. I had to get up and leave the room at one point. The tension in other parts was very strong. There is something rather cruel about the story, for just about the time I got used to, fond of, or hoping the best for, a character, Mrs. Gaskell would kill them off. It was unfair!

The ending was a happy one, but it was so lickity-split after all the agony that I had gone through, that I was tense for hours afterwards. I thought the film needed a longer "happy ending" segment to make up for all the death and loss.

With the fine acting, the humor, the tension and the "action" (yes, there was an explosion) I believe that the men will find this series interests them as much as it does the women. For myself, if I did watch this film again, it would be with a heavy fast-forward finger.

Bringing Back the Old as New

A few weeks ago I was in the grocery store buying flour, and I saw some fabric on the lower shelf. My eye, of course, is always drawn to fabric. This happened to be old-fashioned flour sacking in a beautiful print with roses and stripes. It held twenty or so pounds of mesa flour. Too bad I am not proficient at making corn tortillas, or I would have snatched it up.

Now days all the talk you hear is about being "green" and reducing our consumption and waste as consumers. I do not consider myself a "greenie" but I have always hated to throw away anything that seems to me to be substantial (like a heavy glass jar) or that will not dissolve like compost in a landfill. But on the other hand, I do not think that by being a consumer that it is my fault for having to buy things in packaging that is no longer "Politically Correct;" that was all the manufacturers were offering.

So here is my solution, aimed at manufacturers: Be creative: go back to re-usable packaging. I don't mean recycling, as in taking it out to the curb in a box, or sorting it out at a bottle return machine, I am speaking of making the packaging of products so nice that someone wouldn't want to throw them away. Examples: Flour and other grains, or any pantry items sold in ugly plastic bags, could be instead encased in fabric bags, in different colors and prints. Think of the sales you could get from that! I know I would always buy the fabric-encased goods if they were available. Like our grandmothers, we could re-use the fabric for curtains, clothing, and quilts. People that didn't sew would save their "packaging" and give it to neighbors who were collecting it. It could be the latest greatest trend!

Those who sell products in jars and bottles, could make the jars and bottles really beautiful, or at least put some really nice art on the label. Sometimes you can still find jars of jelly that are meant to be collected and re-used as juice glasses.

Advertisement for Victor Gramophones, from "The Theatre," circa 1910 (Detail)
Giclee Print
Barraud, Francis
Buy at AllPosters.com
(Above, a very recognizable advertisement, that any little child would love to have and keep)
Now let me address the daily onslaught of junk mail. If you, Mr. Company, want me to take notice of your advertisement and thus your business, quit sending the trash. Start looking back at other creative ways that people advertised. In the old days, companies would print beautiful trade cards, or advertise on the back of paper dolls, and people of all ages kept these things and pasted them in their scrapbooks or used them as wall decor. Why not tap into the scrapbook craze of this century and send me something I can use? For instance: the telephone company sends out these great big glossy card stock things that can be quite ugly with all the logos and words and such. Why not just set aside a portion of the card, put something beautiful on it, and say, "here on behalf of our company is a frame/accent/sticker for you to use!" I think that folks would take note of such generosity and who it is coming from.

Or at least leave the back blank so we could do something with it (other than throwing it away!). 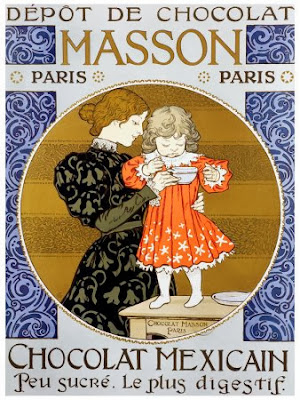 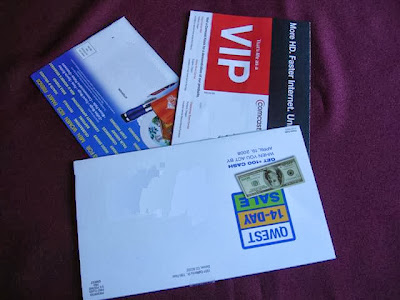 Our Craft Editor sees Junk Mail as an Opportunity! 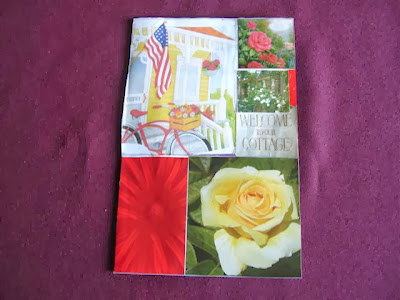 Here we see the above junk mail has been turned into a scrappy-card, using pictures from other advertisments and catalogs. 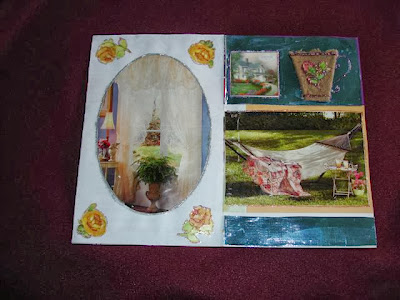