It all started this morning with the oatmeal. I had just gotten up and started in on breakfast right away. I was determined to not only make the tastiest oatmeal possible, but to make the biggest batch yet to see if I could satisfy all the hungry tummies in the family.
I chopped up apples and bananas in the oats, and dumped in raisins and chopped almonds, and stirred in vanilla and cinnamon, cloves and a dash of allspice, then stirred in milk and a little bit of maple syrup:) Last time I did this, they scraped the pan and asked for more.
Wouldn't you know, today was the day that most people weren't terribly hungry. I only had one customer for seconds and thirds.
I was left with a huge pot of cooked oatmeal. No one in my family seems to want to eat reheated oatmeal. So I got out my handy 1958 friend, Betty Crocker's cookbook. I had found out a couple of years ago that there was an oatmeal bread recipe there that worked well with cooked oats. The recipe called for oatmeal soaked in water, but I just substituted cooked oatmeal, since it already had the liquid in it.
I was determined to use up all that oatmeal while it was still warm, so I had to plunge right into the baking. If you let the oatmeal get cold, it is too hard to mix in. I started dumping in all the recipe ingredients, and more... the recipe calls for two eggs, but I had some egg yolks that needed using, so I threw about 5 of those in instead. There was some buttermilk in the fridge, so I put that in along with some baking soda; some sunflower seeds , and some brown sugar, more cinnamon......
The recipe is a "no knead" recipe, unless you double it, like I did this morning! When it takes the biggest bowl in the kitchen, and both hands, plus two little helpers, it can be a mess! By the time the whole mixing/rising/baking process was done it was nearly lunchtime. This was not how I was going to plan my day. But the unintended baking had its rewards. My little boy peeked through the oven window- "Mommy's making REAL bread!" My mother, who does not fancy too much bread, even ate some, and declared it was so good that "if all families baked bread like this, it would give you a perfect marriage, stop teen rebellion, and create total felicity in your home; plus cure all kinds of diseases, mental and physical, as well as uncertainty and nervous complaints."
Then the other reward was that it made four big loaves. That means I don't have to repeat this anytime soon.
Here is the "tweaked" recipe, not doubled, for your convenience:
2 cups (approx. You can use more if needed) cooked oatmeal, with all the trimmings ( such as fruit and nuts)
1/3 cup olive oil
1/2 cup light molasses (I only had dark molasses, so I used half the amount.
The recipe called for 1 Tablespoon of salt, but I don't use that much.
2 pkgs yeast dissolved in in about 1/4-1/2 cup warm water
Mix together.
Add 2 eggs. Mix.
Stir in 5 1/2 cups flour. Stir thoroughly.
Let rest for 15 minutes.
Put dough on well floured board, shape into loaves and put in greased loaf pans. Let rise until doubled (around an hour and a half). Bake at 350 degrees F. for an hour until crust is brown. 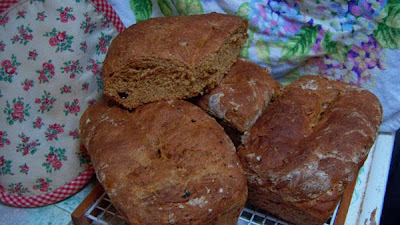 My bread turned out crusty but very soft on the inside. It is perfect warn spread with a little butter and served alongside a cup of tea for a rainy-day country cottage tea break.
p.s. If you do not have leftover oatmeal, the recipe calls for 1 1/2 cups boiling water poured over 1 cup rolled oats; let it soak until lukewarm.
You may also omit the fruit & nuts, of course!
posted by Lillibeth

filed under The Table