How British were they, anyway? 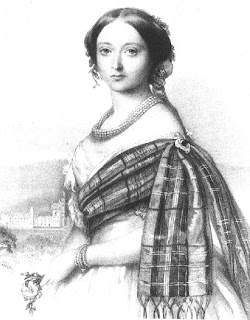 Picture from "Queen Victoria: Images of Her World"
http://www.btinternet.com/~sbishop100/
Queen Victoria is one of my favorite (if not THE favorite) characters of History. Every once in a while I like to share a little tidbit about her.
I was re-reading a book on Queen Victoria, and also found a book of the kings and queens of Britain, and paid a little more attention to where these monarchs came from. (Note: this is a little like Jane Austen's History Of England, I am going to try to be accurate but this isn't a scholarly articles and there will be "very few dates".)
Royal Families have always tried to marry into other royal families to make alliances and keep that royal blood amongst themselves. This makes for some intersting history, such as King William of Orange, who was the Dutch king before became the King of England. Or, in the case of Victoria, her ancestors from Germany.
George the First was from Germany, and became the King of England through some kind of blood connection. George didn't speak English well, and apparantly wasn't really liked by his subjects. The British royal family was called "the house of Hanover" for a time (as George was born in Hanover, Germany and that was sort of like the last name for the family). While the Georges were reigning in England, they were still princes over Hanover.
King George the third's sons married German Princesses. Queen Victoria's mother was a widow of a German prince, and Victoria's half-brother was a German Prince. Victoria herself didn't even speak English until she was 3 years old! She spoke German!
Queen Victoria married a German Duke ( Albert of Saxe-Coburg and Gotha ). As a matter of fact, that became the royal family's "last name", when Victoria died. The royal "house" was the House of Saxe-Coburg and Gotha. It wasn't until around the first world war that the royal family changed its name to Windsor.
But back to this British-German Queen. Not only did she marry a German Duke, but Queen Vicoria's many children married into various european royal families: German, Danish and Russian. Thus Victoria, as many of you are aware, was called "the grandmother of Europe."
posted by Editor

If you need to contact me, my email is thepleasanttimes at gmail dot com