Making it Work for RV Living part one

So now we had an RV all our own, and obviously we had to modify it to fit our family. I was advised against this from a friend, who was sure it would devalue the RV to add to or take from; but with as many of us as there were, and with our lifestyle, change was necessary. We did these things over the months to make this RV work for us. 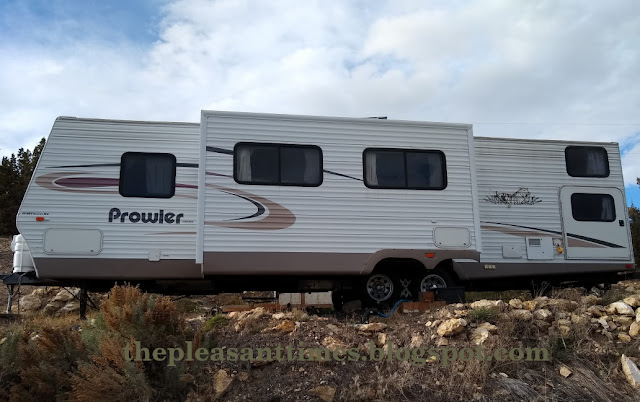 The first thing I did was to clean it. It had been cleaned by the sellers and looked great, but I felt better putting shelf paper down in all the drawers and shelves. I also removed the bullets and crayons in the cracks by the couch (obviously this had been a family hunting season camper). 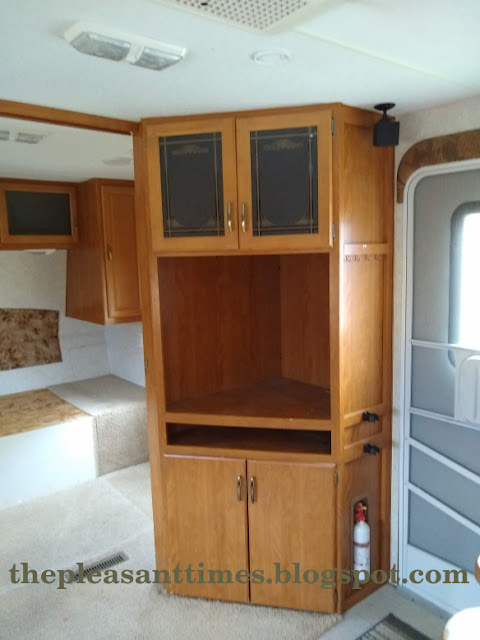 One of the first to go was the DVD player and TV screen. As luxurious as it would be to have them, we homeschool and needed a place for BOOKS!

Next was the microwave. We needed kitchen storage and we don't use a microwave to cook with anymore. Another modification was to not use the gas oven/stove. Partly because I don't like the smell of cooking with propane in a small space, and partly because it seemed to be the favorite haunt of mice. So we put a board on the top of it for extra counter space which was sorely needed. I used slow cookers and a toaster oven for a while in place of these things. Probably not a good idea for the electrical system.

We had the repairman out many times to fix and replace (I'm so happy there are mobile RV services, we didn't have a truck to haul this thing to town!). Electrical problems, water problems... I can't remember now if there were heater problems too. It wasn't because it was a bad quality rig, it is just when you live in one full-time things can get worn out faster . For instance, the electrical system was overtaxed. Partly because the electric line, a beefy thing, was too long to do the power we needed (sorry I can't explain that better). Also because it was asking too much of a holiday camper to be running cooking appliances 3x a day every day for a large family. It could have handled a vacation, maybe, but constantly wasn't a good idea. 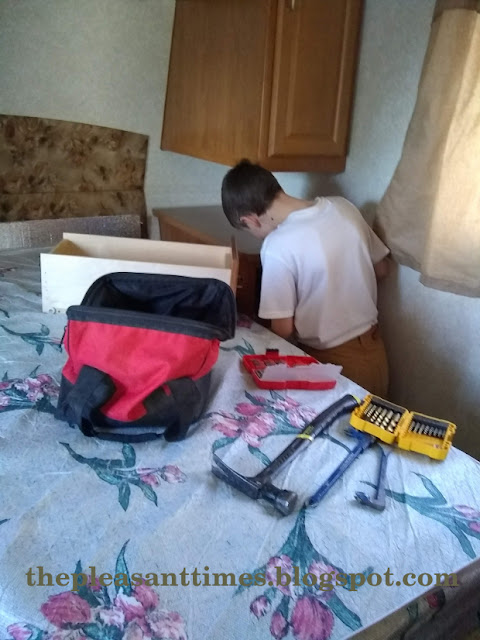 The other modification was the beds. Though the ad said "sleeps ten" it meant ten very short people. The queen-sized bed (which in an RV-speak means short queen) was half on some structure that covered one of the storage bays, and half on an indoor under-bed storage box. There were built-in drawers on each side. We took took out one of the drawers, then took out the storage box under the bed. We sold the mattress and made the space into a twin-xl-daybed. 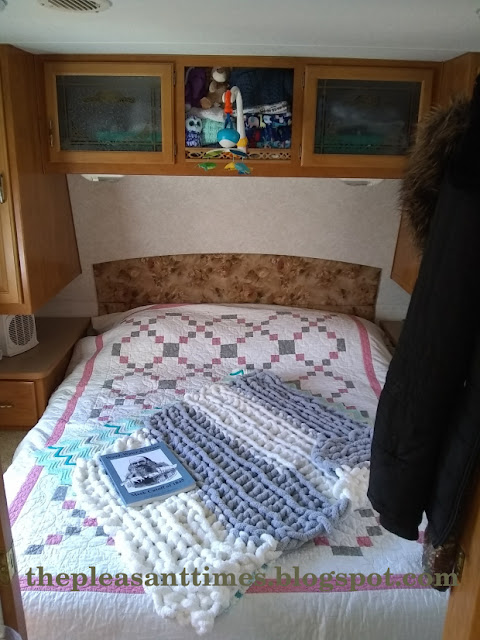 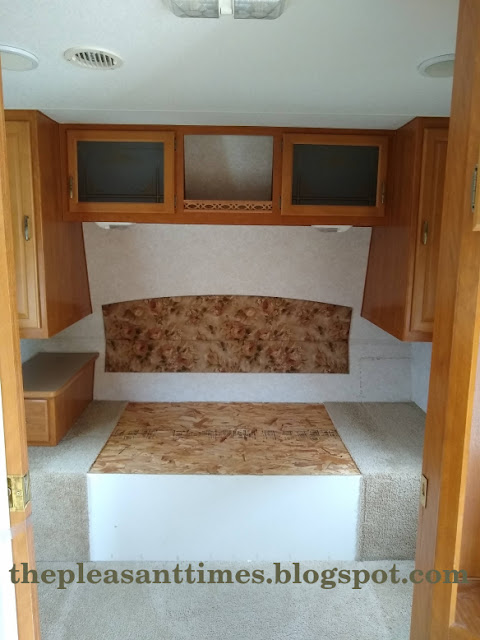 Yes it was ugly. And sleeping against that thin wall was COLD. But it made a much longer bed. 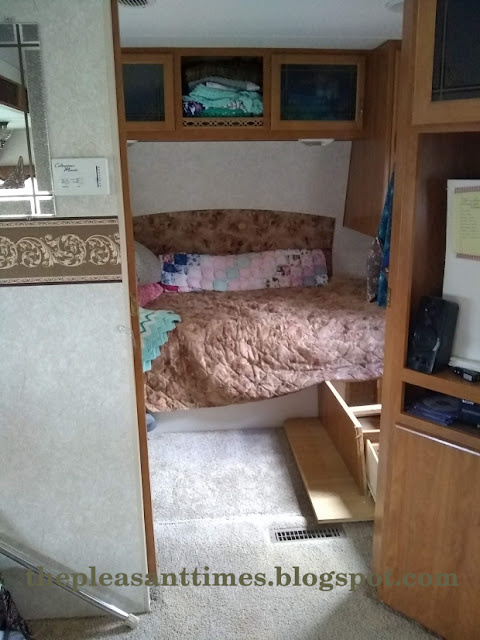 We lost a lot of storage with this modification (you can see the remnants of the storage box above) but there were other advantages. The extra nice one was the floor space! No more crab-walking around the bed! 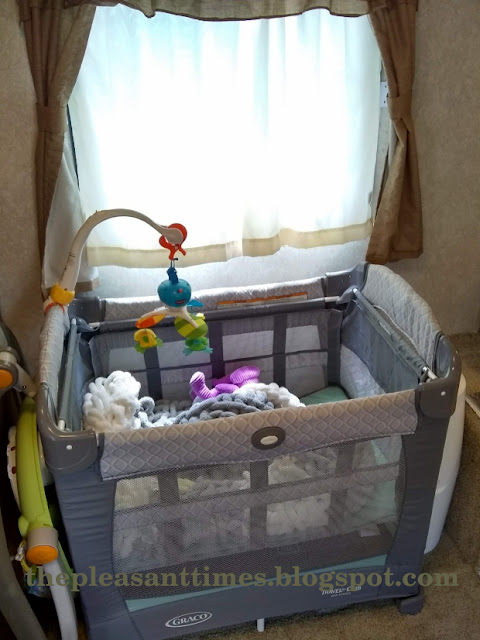 There was room for a portable crib and a dresser of sorts. (The mini blinds were not in good shape, so we took those off and made some curtains to go in their place. We don't like mini blinds anyway!) 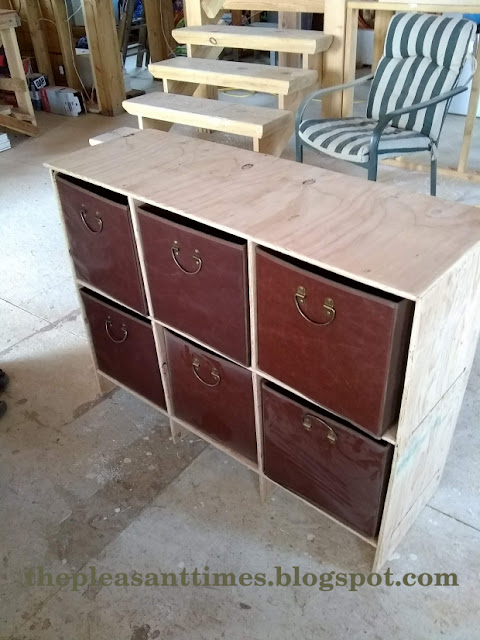 The "dresser" was really just a frame to hold bins. It was one of the first woodworking projects one of my sons built. He also took the wood from the drawer and made a little cart for the kitchen, sort of a mini "island" for some extra space.

Since we were not going to use the camper as a traveling vehicle, we were not worried about adding such furniture to it. If it had been for going on the road, we would have built-in all additions, and made them of lighter materials.

There will be more things I learned about RVs on Friday's post!