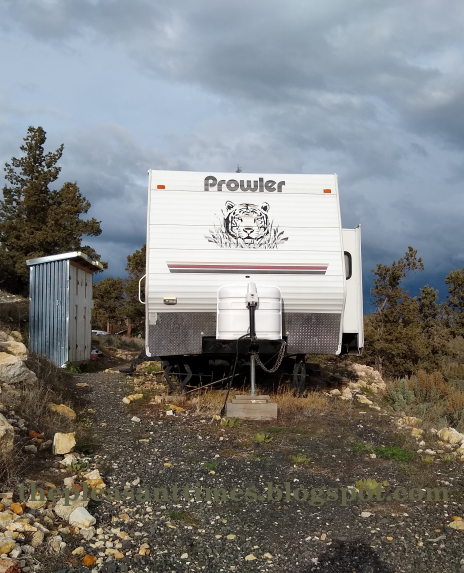 We were happy with this rig and felt like it served us well. I have a post with a few more modifications and some things we learned in living in it full-time.

One thing my husband just reminded me of, is always check the awning before you buy. Don't believe the salesman if they say it doesn't need to be seen, it's okay. This one was awful! There are a few things you might see & smell when you open an awning. Mold, , water stains and dripping old brown water, strong vinyl scent, and ripped shreds of vinyl blowing in the breeze. We meant to have it replaced but never got around to it. 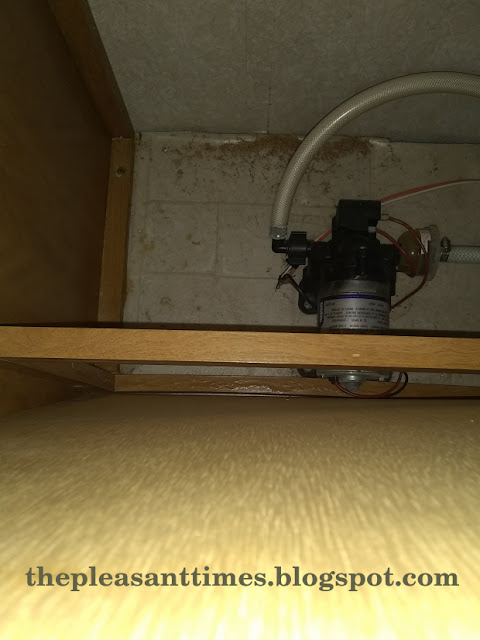 Under the TV shelf there was a tall, narrow cupboard, rather useless. We saw that the back of this space was a panel with screws, so we peeked inside. Aha-- the water pump. The nice thing was that the pump was a short little thing (and not something we would be using, as we were hooked up to the site water). So we modified that cupboard to make a shelf above the pump, giving us a few more inches to hold things.

Speaking of site water, you can't have full pressure water going into an RV. You have to have a hose fixture that will let you control the pressure/opening. And of course, always buy the heated hose!

I had to add "Command hooks" everywhere. I didn't want to mess up the walls but we had to have more storage. Thankfully the wallpaper was never damaged by them and they removed cleanly. 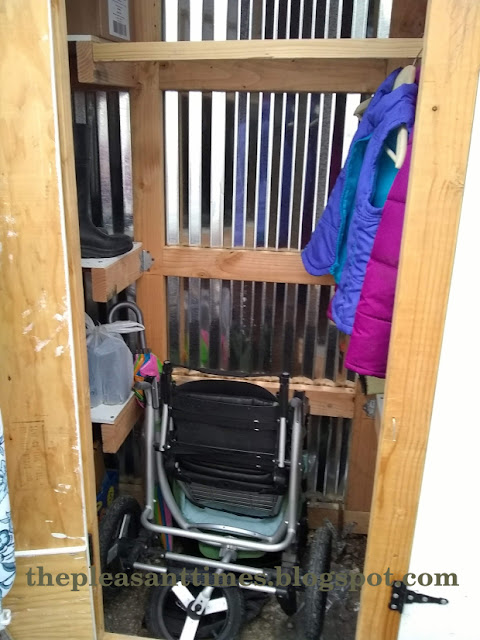 There was a huge storage bay under the bunks, and on the other side of the RV. Still there was a storage place needed for all the shoes, boots, and winter coats so we built an outdoor "closet" which was just a narrow shed. 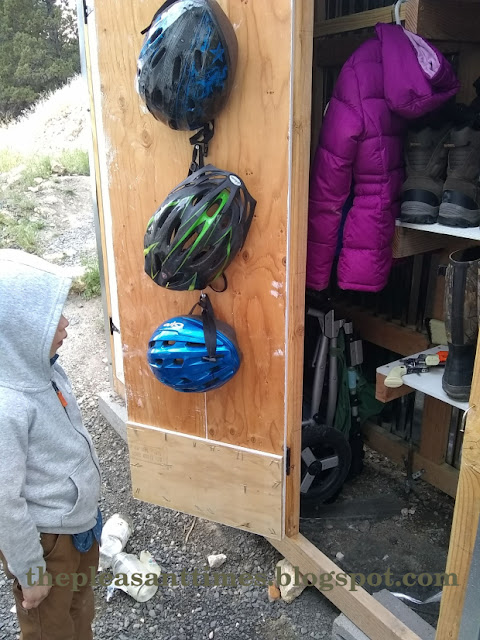 These photos were from right after it was built. We ended up wrapping things and putting coats in bags to hang so it wasn't so pretty when you opened the door! It wasn't spider-or-mouse proof, but with no food in there there wasn't much attraction for mice. It was more often lizards that were attracted to the shed. Still, we didn't want them getting cozy in our things.

We blocked up many passages  in the camper used by mice. This isn't because we had bought a bad RV, it is because no matter how fancy your RV is it will attract mice. Look at every plumbing or electrical chase as a mouse-road. Best to get them all plugged up (we used steel wool) before you have an infestation and a huge clean-up job to do.

RVs are stickers and cardboard inside. Unscrewing things multiple times (like panels to electrical units and such) usually strips the screw-hole. Things scratch up easily, but some things (that I supposed would be ruined) are surprisingly durable.

Though the "sleeps ten" bit was encouraging for our family size, RV water heaters aren't very big. They are "on demand" but only really effective if you use the propane rather than the electric. If we felt that we were running out of propane and needed to use the electric more, we couldn't get many hot showers in a row.  After-dinner mega-dishwashing had to be timed just so or there would be a long delay while we waited for the water to reheat.

Some propane companies have a smaller (100 gal.) tank they will bring out for RVs. Frankly we should have had a full-sized one because there were times in the winter when the propane truck could not make it out to us, and we were precariously low.

When it rained, if the RV wasn't exactly level everywhere (that is, if anything was warped) there would be a leak at the slide-out. If it snowed, it was a constant battle to keep snow and ice off of the steps and out of the entrance (I needed a fresh stack of towels every few hours to soak up the mess). And in the winter there was the winter insulation skirt that needed to be put around, and fetched when storms blew it away.

I'm trying to remember more tips about living in an RV full time. Maybe more will come out in future posts!