Hidden Dirt and Airing the Laundry

Boy if that isn't a "click-bait" title! A post this boring needs that kind though.

In hopes that this could be useful to someone, I am going to post a bit of a laundry horror story:)

I had an extra project going on last week that was none too pleasant: fixing the smelly washing machine. I don't mean that the work was unpleasant, but the increasing unwashed piles of laundry and the family precariously on the edge of not having a change of clothes for a week wasn't so nice!

Our washer was new six years or so ago, and it has been through washing rags of from all aspects of construction, sawdust, and the daily household laundry of a family living on a bare building site with blowing desert dust, oh and rags from cleaning off the yearly wildfire smoke from the walls.

For a while now, since being more closed-up in an almost-finished house, the washer has smelled increasingly of mold. Airing it out, using the "clean washer" setting, using bleach, and dumping in vinegar had no effect. The clothes recently started smelling like the washer! So did the house! I knew that it needed to be taken apart and the mold found and cleaned.

I started with a google search and did not need to look any further than this blog post.

From there I went to YouTube to look up my particular washer, or as close as I could get it. There are lots of videos on disassembling a washing machine, and some appliance parts stores have put up very helpful videos for the DIY-er (like this one).

It was helpful to look into this ahead of time, and order parts and tools needed before I took things apart. I knew that the week I was waiting for tools to be shipped to me that I should do as much laundry as I could so I would not be behind if this project took me a couple days. Honestly I was reluctant to do much because I was sure the clothes were not getting clean anymore.

My tools came and although I could have done the disassembly by myself, it is always nice to have company! Especially when they decide to take over doing the work. Each step of the way I had the internet up and ready. Besides watching YT, pausing, doing, watching, pausing, doing, I also looked up videos that had to do with the particular place on the washer I needed to disassemble, and there are plenty of them. DIYers are sure generous!

Once I had the top off and the agitator off, we could see some yucky stuff, not pretty but it wasn't black mold at least. It was mud and rust. 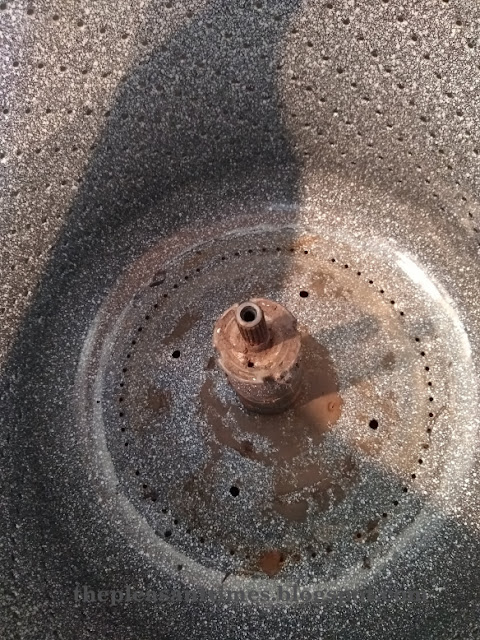 The rusty metal parts now had to be disassembled. This is where it took 2 days of WD-40 and Vinegar soaks. I am not sure that pouring hot boiling water on it did much but I went ahead and tried that, too. Next day I just did WD-40 and alternated treatments of that with pounding a spanner wrench with a rubber mallet.

The third day, Mr. Humphrey stepped in and got that first rusty nut off the washer  (and no, "rusty nut" is not my nickname). He was then faced with a rusty drive collar. By then I was starting to wonder if I should take the clothing to a laundromat.

Using several YouTuber suggestions, he tried a c-clamp and other tools, got a stronger assistant and was able to get the rusty stuff off and the inner tub out! Finally we could get to the outer tub, and THIS is what was in it: 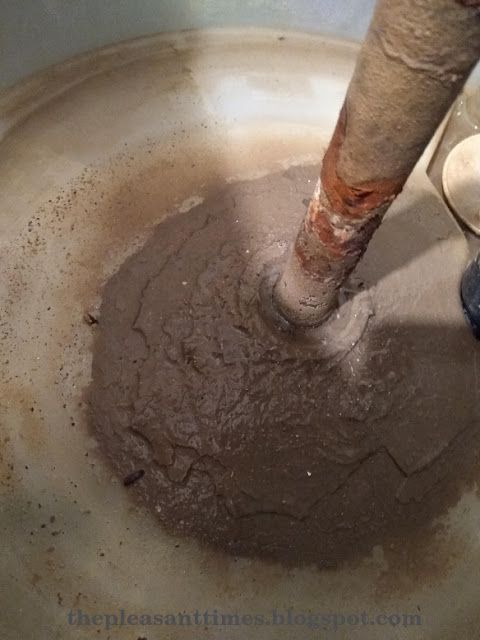 A pile of mud.

No wonder my whites never stayed white, nor did bleach do a thing to help them.

Basically I was just putting sort-of dirty clothing in to swish in muddy water with some ineffective soap.

And I should have connected some dots and known what was happening, for our "soil" out here (if you could call the blowing dust that on this mountain side) is a grounded chalk-rock type stuff mixed with ash and dirt. When it rains, it makes a clay-like mud that sticks to our shoes like glue. It would make sense that a lot of the finer dust would turn to sticky mud in the washer, and glue the dirt with it. It looks like sludge but it was more like a stiff mud, and scraped off in wide strips under my plastic spackling knife.

What I didn't find, and was rather surprised not to, was black mold growing up the sides of the tub, nor did I find gobs of wet sawdust. Not even hair clogs or gooey lint. Just mud. 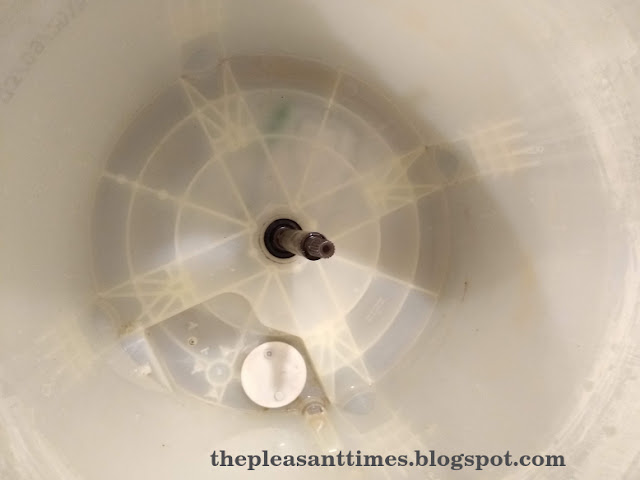 Though it seems silly to post pictures of the inner tub of a washer, you have no idea how rewarding it is to look at it until you have tried this washer-cleaning thing yourself!

This is a "self cleaning" washer by the way, there is no lint filter in my machine. We even unscrewed the drain part and washed under it.

The inner tub wasn't too bad, but had a thin coating of goo and ick and so we gave it a good scrub. 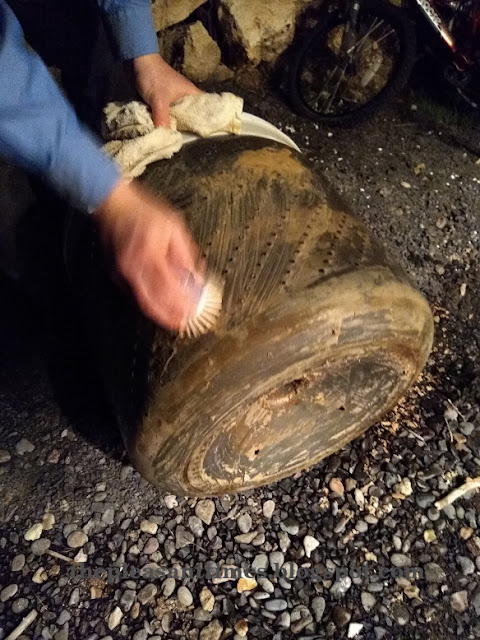 By that time it was getting dark and late, and we were glad to get the washer back together again and end this project. 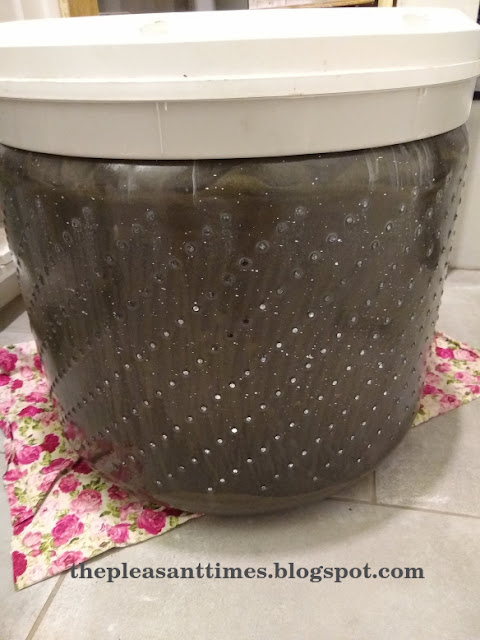 Unlike Humpty Dumpty, the washer did go back together again quite well! But since we were being thorough, there were a couple more things that we cleaned. I suspected that the washer tray (a great big plastic thing) was harboring something. We lifted the washer and slid the tray out, which was pretty bad with dirt as well. Besides that, it had suffered a bit from the construction and had "great stuff" and tar splattered on it.

My husband was putting the drain hose to rights when it came into his mind to disconnect it and clean it out (it is rather long and opaque, I know some folks have a clear hose but we could not tell what was going on in this one).

We took it to the shower and dialed the shower head to "turbo blast jet" mode, turned on the hot water and blasted down the end of the hose.

I do not have a photo of what followed, and it is too bad because it would have been a really good addition to a post about gross washers.

After the hose seemed clear of mud flakes, I turned it around and thought I'd just back-rinse it.

We rinsed and rinsed and rinsed that hose both ways about 6 times, and never got to the end of the brown flakes coming out. We gave up, because of fatigue and the late hour, and said maybe when the washer drained it would take care of the rest.

Folks, if you don't want to take your washer apart, you might just start with cleaning out the drain hose!

Washer all connected, the first load we did was the rags we used during the whole yucky process. I did stand there waiting for the drain cycle (maybe I was a little tired...). I could hear my drain hose sounded like a waterfall! That was different.

And I don't know anyone who does this, so it might sound a little crazy: I stick my head in the washer how and just revel in the "new appliance" smell. I also bury my nose in the loads coming out of the dryer, happy that they smell sweet! The room smells nice, the house smells nice, and it was worth the trouble.

By the end of one amazing Monday I had empty laundry baskets and stacks of folded clothes. It was so nice to start Tuesday with a bare laundry room floor.

I will probably have to repeat this washer-cleaning every year, to keep the sticky mud from building up, but don't worry I won't make another gross post about it!